skip to main | skip to sidebar

New arrivals just in time for Christmas.
A darling new cabinet sized bear from R. John Wright named Tucker wearing a winter scarf and hat and the second in the series of Father Christmas Mice,  Kris Kringle wearing a blue coat and carrying a tree and his sack of goodies for good little boys and girls.

Steiff's Fright Night Friends has also arrived. A bit late for Halloween this year but there is always next year!!! 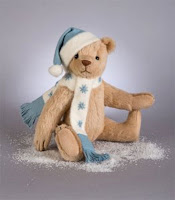 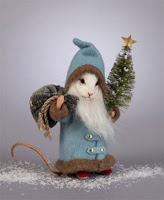 Posted by Village Bears at 4:47 PM 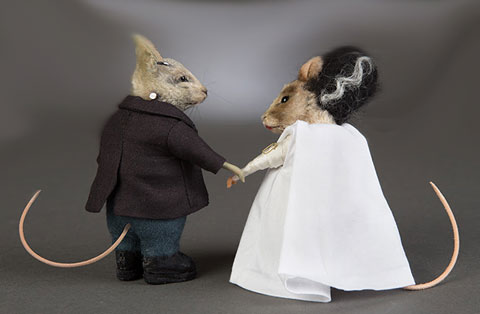 SUPPLIES VERY LIMITED!
Both 3", 2017, "Frankenstein" and the "Bride of Frankenstein" match set - is the first in a series of MONSTER MICE - celebrating the classic monsters of filmland! Frankenstein's fearsome bride is made of fine mohair plush with hand embroidered features, resin hands and feet, glass eyes, inset whiskers, and a leather tail,jointed at the neck and shoulders for added posability. The Bride is outfitted in a stark modernist gown tailored of crisp white poplin. Her arms are wrapped with silk bandages held together with tiny safety pins. Her iconic hairstyle is fashioned of fine merino wool hand-rooted into her scalp. Like most of the recent RJW mice the Bride has a built-in metal stand for effortless display.


Frankenstein wears the classic outfit of trousers, a collarless shirt, and a black topcoat. His hand-cobbled, sturdy leather boots enable him to stand unaided. Frankenstein's deathly pallor is accented by his lowered eyelids - giving him a touch of melancholy. Tiny metal staples in his forehead and bolts in his neck provide the perfect finishing touches.
Posted by Village Bears at 11:15 AM


John & Susan Wright made a rare signing appearance in England this month! The event was the first annual Teddy Bear Festival held at the magnificent Woburn Abbey estate and gardens. Two extremely limited RJW 'Edwardian' bears were made to mark this special occasion. The first is a little black bruin named 'Woburn.' He is accompanied by a sweet companion bear named 'Abbey!' Both bears measure just 8 inches tall and are made of the finest Shulte mohair. Five-way jointed, each bear features a molded leather nose, glass eyes, hand-embroidered features and detailed felt paw pads. Woburn sports a Black Watch plaid bow with a traditional brass bell while Abbey has tiny pink silk bows on each ear. 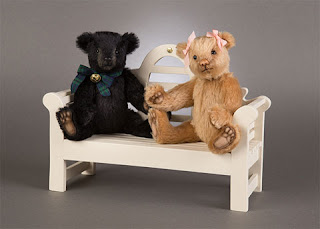 The bears are produced in editions of only 50 pieces each.   Village Bears is pleased to announce that we will have a very limited number of these bears to sell along with the very limited garden bench  produced by the RJW studios to accompany the Woburn Abbey bears.
Posted by Village Bears at 3:16 PM

Introducing the latest limited edition from the studios of R. John Wright in Bennington VT. The Little Prince Teddy Bear. 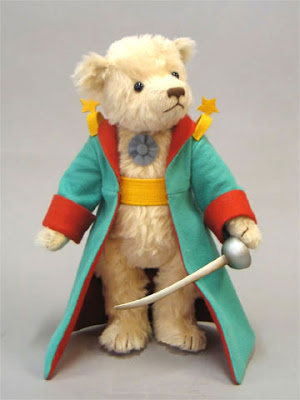 Posted by Village Bears at 3:12 PM

The George Washington Teddy was just delivered yesterday along with the adorable Wedding Swans and more Hansi and Franzi parakeets. Easter has passed but we still have a set or two of the new R. John Wright rabbits, Hop, Plunk and Wobble. Some matched numbers and some not for those who do not want the complete set.
Posted by Village Bears at 11:21 AM